If you know me, you most definitely know I have a not-so-subtle obsession with Paris and well, anything French really. In 2015, instead of going to new places, I went to Paris three times in six months, just for fun. And then I didn’t go for two years. I missed it too much to spend any more time not going, so Simon and I arranged a little pre-Christmas trip. Read on to find where we hid from the cold on our December trip 🙂

We booked a cute Airbnb in Le Marais, as I quite like the area and there’s enough entertainment (read restaurants and cafes) around. We arrived before noon, which was before check in time, but our lovely host let us drop off our bags and pick up the keys before the flat was ready for us.

After leaving our stuff, we set off to explore what’s around and ended up walking up to Canal Saint-Martin, where one of my favourite cafés is. It had just started raining, and as we were right there, we just had to sit at La Marine for a cup of tea.

It was a rainy day, but I was desperate for some Parisian scenery, so we walked for a while. We found little treasures at Passage du Grand Cerf and then Colette, which is a fun concept store, big treasures at the Place Vendome shops and decided we’d like to stay at the Ritz next time.

Simon was super excited to take me to his favourite choux-pastry place, Popelini, where we got ourselves a little treat.

For dinner, we chose Le Croco du Marais, which was literally thirty seconds away from our door, as one, it looked cute and two, we didn’t want to go too far in the rain. It was busy, so we thought it would be good, and we were not wrong. Try the magret de canard in honey sauce and thank me later.

Day two was culture day. After brunch at Season, located on our street, (bacon & maple syrup pancakes because that’s how basic I am), we walked to Grand Palais to see the Irving Penn exhibition. It is one I definitely recommend if you’re interested in photography, as Penn’s work is really interesting. Go on a weekday if you can, as I heard there are mad queues on the weekend. We were lucky to go at a quiet time and managed to see everything we wanted to.

I’d never been to a Laduree tearoom, and as we weren’t too far from one and needed a break after all this walking around, it was only fair we had tea there. It was so nice to sit inside this little heaven and watch the happenings on the street while sipping on fancy tea. I believe this is the life I’m born for.

Then we walked to the Musée Yves Saint Laurent, which opened earlier this year. This is another one I strongly recommend, not only for fashion lovers. Yves Saint Laurent had such an amazing talent, and it’s worth spending some time learning about his life and creations. Don’t forget to book your visit, as I don’t think you can just turn up.

From there we walked down the beautiful Avenue Montaigne, even prettier with all the Christmas lights on.

For dinner we went to Chez Nenesse – a small family run bistro, where we had a lovely hearty meal and of course, vin rouge. We also went for some cocktails at Sherry Butt, which is a nice little bar not too far from the restaurant. They don’t have many traditional cocktails, but where’s the fun in that? Try something new!

Day three was finally a sunny(ish) one, and obviously, we walked a lot, but not before a couple of breakfast tacos at Café Crème, also on our street.

First off was another concept store I’d read about, Merci, which was super busy, but also very cute. Great for last minute Christmas shopping in case you’re in town.

Then we walked to L’appartement Sezane, which again was crazy busy. I guess the Saturday before Christmas isn’t the best time for aimless wandering around popular shops, but I really couldn’t stop myself. We did, however, manage to stop ourselves from buying anything, which was very difficult.

To reward ourselves, we had the biggest croque madames ever and a two-hour nap before heading to my favourite bar – Le Perchoir Marais. Now be warned, the place is much more fun in the summer, as it is a rooftop bar and the first time I went, it was hot and gorgeous outside. The bar is currently in its winter mode, with its décor taking inspiration from the Nordic countries, which means it’s all hygge. And they’ve covered it, so you can still admire the view of lit-up Paris, even if it’s raining. Be warned – if you go on a Saturday evening, you are likely to have to wait a while for a cosy seat, but the glorious view of the Parisian rooftops AND the lit-up Eiffel Tower are totally worth it.

On our last day, we had a bit of a drama when we tried to leave our bags at the storage at Gare du Nord, as the staff there didn’t seem to be keen on working, but it all worked out in the end and we had a whole day to enjoy Paris in the sun. As you may have noticed, I quite like walking around, so after we got a very healthy brunch at Republique of Coffee, we walked up to Paris’ famous Galerie Lafayette.

We wanted to see the glorious Christmas tree, and as we were there, I decided to buy myself a little gift. I’d never been to the shopping centre before, and Sunday before Christmas is by no means the best time to go there, especially if you don’t like crowds, but the tree itself is worth it. 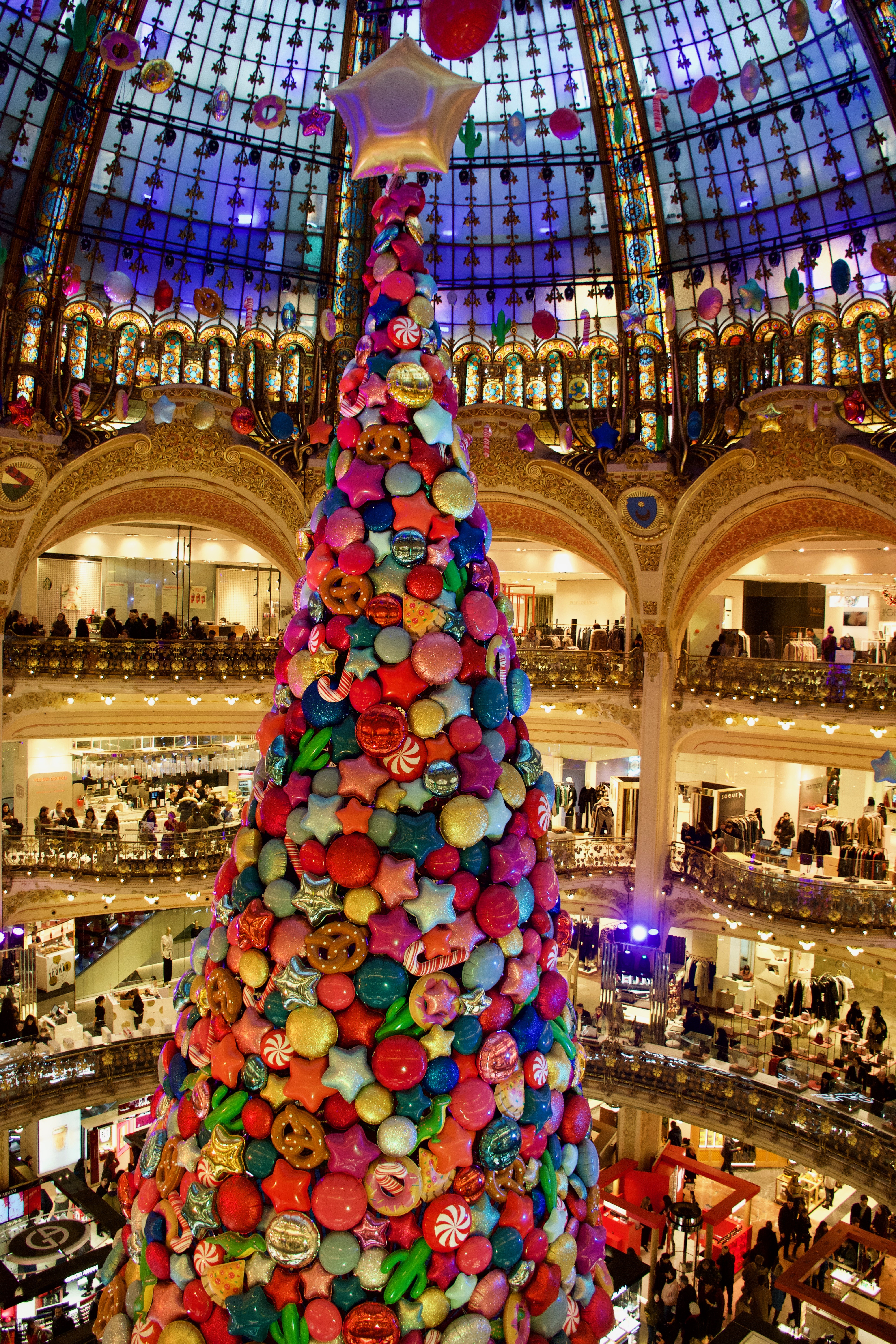 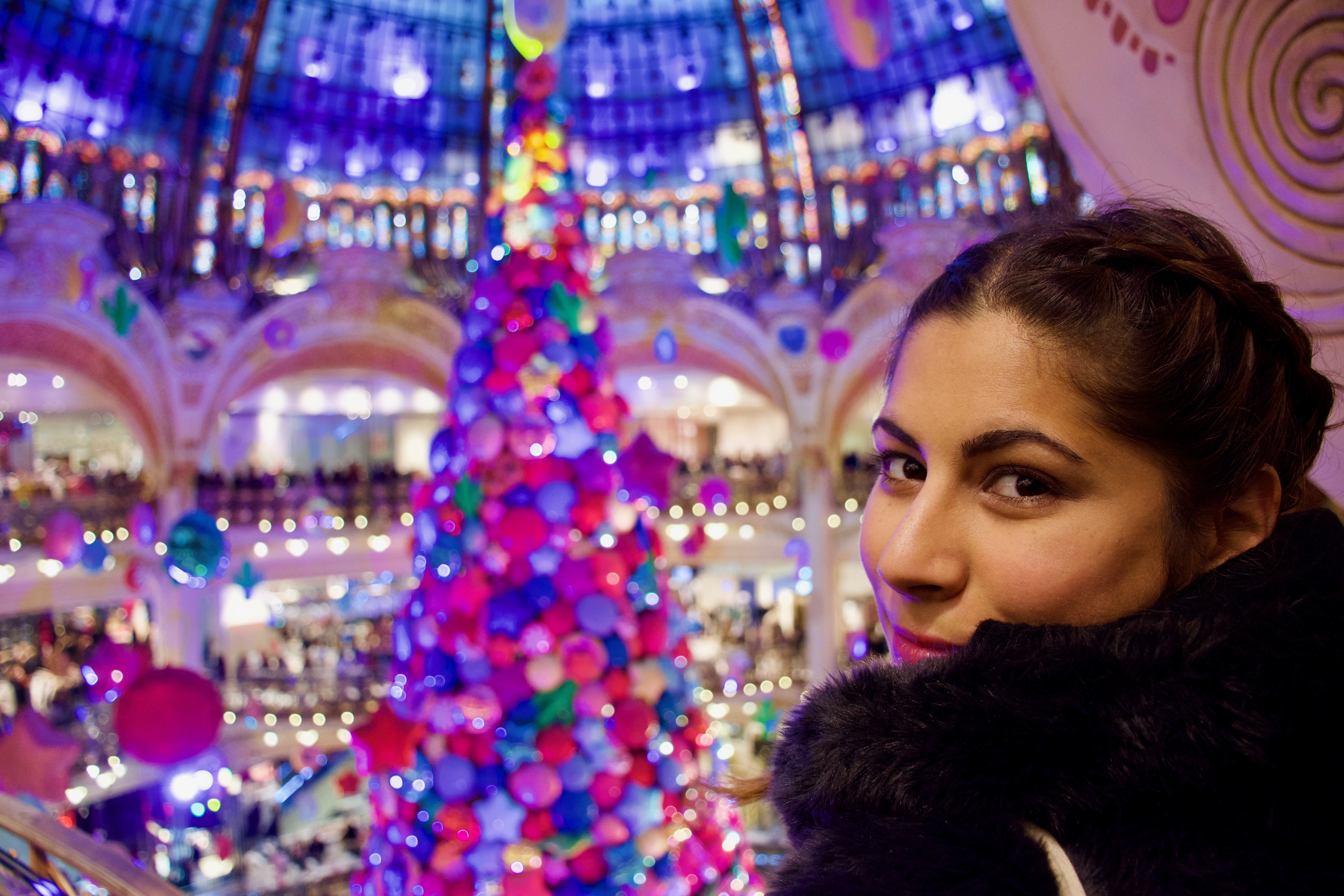 After you’re done adding everything you see to your wishlist, do as we did and have a glass of champagne at the rooftop bar, while looking at the sunset and la Tour Eiffel. 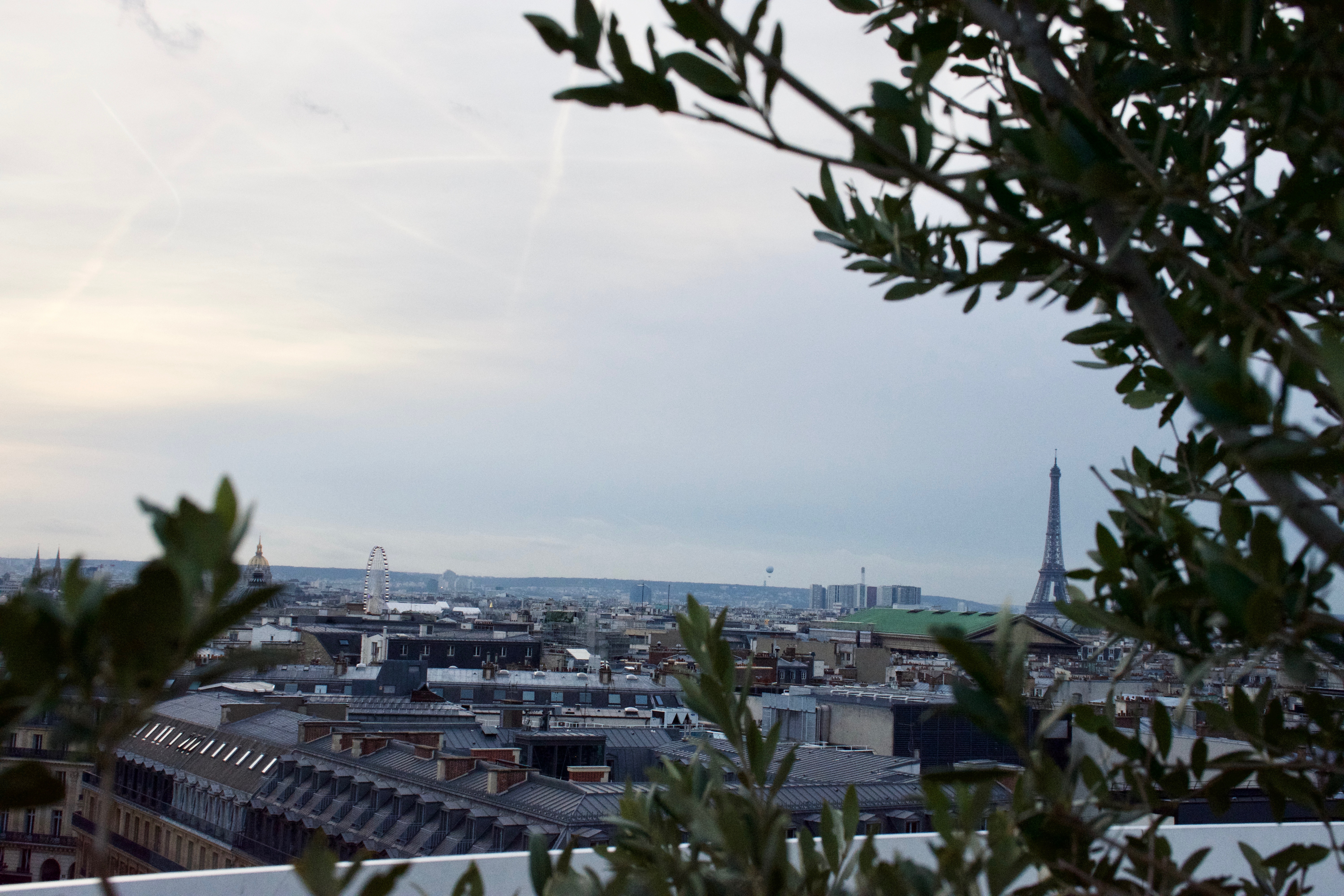 I must say, as pretty as Paris is with its Christmas lights, I much prefer it in the summer, but this might be because I really dislike the cold. But despite the rain and the wind and the weird people at the station and the hour and a half delay on our way back, Paris is still my number one city…

Have a Merry Christmas, you guys 🙂

You may also enjoy: